Friday AM Quick Tip: Using Zoanthids to Fill in the Gaps

Coral warfare is a real thing both in the ocean and in reef tanks. Every inch of rock or sandbed is fair game for a fight for real estate. To assert dominance, corals use warfare to destroy neighbors and to claim their territory.

Except one coral that plays nice – zoanthids. 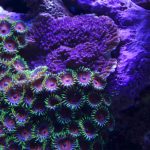 eagle eye zoos next to a montipora cap

Zoanthids won’t throw out sweeper tentacles or throw out their insides in an effort to fight off a neighboring coral. Zoanthids simply grow where there is available real estate, yielding to their neighbor’s existing territory. Therefore, zoanthids are a great coral to use to fill in gaps between corals, even s.p.s. corals. Zoas will grow right up to the neighboring coral and then stop. The worst thing a zoanthid will do is shade another coral, in which case the offending zoa can be removed with scissors or a razor blade.

If you’re looking to fill in gaps between corals, zoanthids are your answer.

Comments for this article (1)