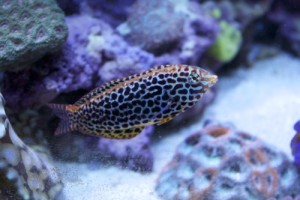 I remember the first time I saw a Leopard Wrasse (Macropharyngodon meleagris) in a saltwater tank because when I saw it, I immediately wanted one. Never before had I seen a fish with such unique patterns mixed with a contrast of two simple colors – black and white. At the time the fish was in a fellow hobbyist’s tank and he wasn’t interested in selling it which was likely a good thing as I was forced to go home and read up on my new found bucket-list fish.

My initial research was a heartbreaking. The fish had a reputation for not doing in well in captivity due mainly due to a refusal to take prepared foods. After purchasing the leopard wrasse I saw in the hobbyist’s tank and after acquiring, quarantining and conditioning several of these fish for clients, my experience with them has been 100% opposite of what I read.

Note: Leopard wrasses sleep in the sand bed and will hide in the sand when scared. Therefore, if you keep a bare bottom tank, this fish is not for you. Also, while in quarantine, I will place a larger plastic container of sand in the tank for the fish to seek cover. This is one of the few times I’ll allow sand in a quarantine tank.

Every fish I put in my tank gets quarantined and besides disease prevention, I love using the quarantine time to get a fish onto not only prepared foods, but also onto the prepared foods I feed. I use live brine for all my new arrivals and the live brine trick works really well with leopard wrasses. 100% of the time within two days the fish are accepting live brine and within seven days the fish are on frozen food. Once the leopard wrasses accept frozen, they eat anything I place in the tank. Flakes, pellets, nori, mysis, etc. You name it, they eat it.

I’ve found they also tolerate medications quite well as I’ve treated several with copper (Cupramine) and they don’t blink an eye. Disclaimer: treating with copper requires you understand the diseases you are treating for as well as proper quarantine procedures. Please don’t grab some copper and start medicating your fish without doing your homework

These fish are fantastic hunters as they are very agile swimmers. They can hover in one place, back up and get into small nooks and crannies in your display tank to eat one of their favorite meals: copepods. These fish will decimate your pod population so if you have other pod eating fish like mandarins, I would not place a leopard wrasse in the tank.

Besides out competing fish for food, the leopard wrasse is a good citizen and gets along well with other fish. Clients who have placed trios of leopard wrasses report that two of the wrasses often pair up and will harass the remaining leopard wrasse.

The Leopard Wrasse will catch your eye and hold your attention as watching this skilled hunter is awe inspiring. They are very athletic fish and they eat like it too. I plan on placing two leopard wrasses in my 450g tank as my tank matures.

Comments for this article (8)