The Midas Blenny (Ecsenius midas). A fish who is well into “glamour without the bill” territory with a golden yellow body and sparkling blue eyes. While the Midas Blenny is beautifully colored, what is most striking about the fish is the unique swimming motion which closely resembles an eel. When swimming, the anterior (rear) part of the fish hangs below the rest of the body and the body moves in a ribbon-like motion.

The Midas Blenny also spends a lot of the day perching on rocks instead of swimming in the water column. It is known to hide in crevices and will back itself into a hiding spot. If you’ve ever seen a fish swim backwards, it is quite a fun experience. 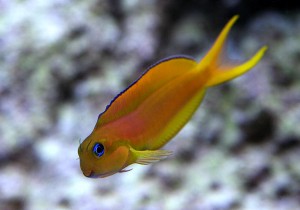 The Midas Blennie is on my list of great beginner fish and even tanks filled with rare or more advanced fish are incomplete until a Midas Blenny is in the system.

Comments for this article (17)