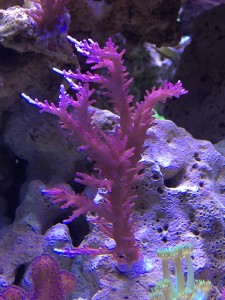 Red Dragon Acropora in one of my client’s tanks

The Red Dragon Acropora (Acropora carduus) is a relative newcomer to the acropora scene, at least here in the USA. It was thought to have been imported in Canada about 10 years ago and colonies were eventually sold to US coral farmers. (Who says the USA gets all the good stuff first?)

Red Dragon is easily recognized by it’s longer thinner branches which lead to coralites that are spread out more than shallow water acros. Keep in mind that in higher light conditions, the coralites tend to grow closer together which could throw off your identification of the coral.

While color isn’t the best way to identify a coral, a healthy and fully colored piece of Red Dragon has a deep fuscia color with white or polyps. Sometimes just the coralites retain the fuscia color while the body of the coral is white.

Red Dragon is a “deep water” acro meaning it is found in deeper water (40-60 ft) than most acropora species. Just because it’s a deep water acro doesn’t mean the coral prefers lower light conditions though. Several hobbyists report that this coral does well in high light conditions (PAR > 350). As I’ve always said, each tank is different so if you’re keeping a Red Dragon acro, and it doesn’t like the high or low light conditions you are giving it, try moving it to the opposite light condition and see what results you get.

If you’re looking for a piece of Red Dragon, this coral is widely available as it is aquacultured extensively which also  helps depress the price point.

Comments for this article (4)